The fortified monastery of Christ Photodotis, which commands sweeping views of eastern Naxos and the coast.

The trail starts at the small village of Danakos, situated in a dell on the Naxos uplands, next to a rich spring at the foot of Mt. Zas.

Initially stone-paved and uphill, the trail then crosses a forested area – mainly with oak and maple trees.

First stop is at the fortified monastery of Christ Photodotis, which commands sweeping views of eastern Naxos and the coast.

The church of this excellently restored monument features the remains of an early Christian place of worship – with non-iconographic décor- and 9th century frescoes.

The trail continues in a verdant landscape in the shade.

At Karkos position, it forks out: a detour leads to Apiranthos, via Pera Chorio area.

The main route leads on to the cool gully of Perachoritis, where the modern water conservation dams catch the eye.

A restored windmill stands where the footpath meets the provincial road, and right opposite is the Church of Agios Ioannis – for which the village of Apiranthos holds its biggest celebration and feast.

The trail continues through the lush Finelia area, following a winding downhill route to the Tragea plateau.

This is the old footpath Apiranthos pupils would take to their school in Tragea.

Appropriately sing-posted, the trail joins the gully for a short distance and then becomes a farm road.

Before reaching the village of Kerami, the route goes past Agios Ioannis Prodromos – a square, domed church with finely maintained frescoes.

You are in the heart of the Tragea valley now.

The trail continues to Metochi, where you see the remains of the tower of the same name and the cruciform domed Church of Agii Apostoli – a 12th-13th century construction of rare architectural style.

The termination point – and cultural highlight- of the walk is the Church of Panagia Protothronos at Chalki, a gem which has dominated Tragea’s Byzantine “park” for 15 centuries. 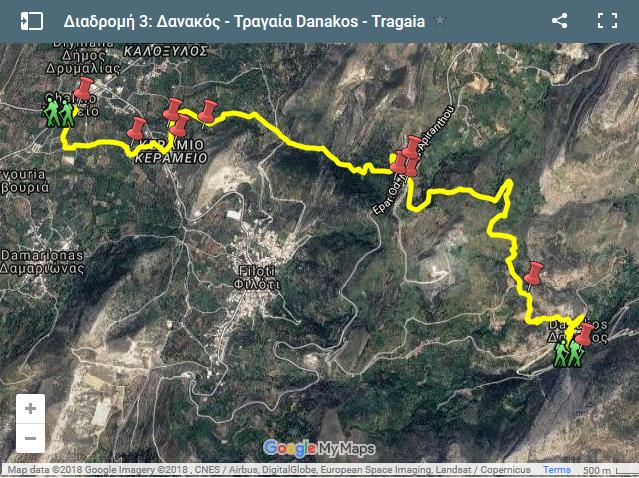