This hiking-trekking trail follows a circular route around the largest part of the olive grove and the Byzantine “park” of Tragea, taking in the traditional, special-character settlements of Chalki – old commercial and administrative center in the Naxos uplands, Monitsia, Moni, Kaloxylos and Akadimi.

It may be divided in two alternative walks, starting at Chalki and terminating at Moni, or vice-versa.

– The first, following a northwesterly direction from the exit of the rare Neoclassical formation of Chalki, takes successively in the churches of Agia Marina (single-aisled, cruciform and incorporating ancient materials), Agios Georgios Diassoritis (with a small detour, featuring a host of frescoes), Agios Antoniosand Agios Nikolaos/Agios Dimitrios at Monitsia, the early Byzantine, triple-aisled basilicas of Taxiarchis and Agios Issidoros (reached via short detouring footpaths), and Panagia Rachidiotissa (domed cruciform).

The trail continues in a direction parallel to the gully and then climbs on an oak-forested landscape. An impressive watermill stands where the footpath meets the gully.

The ascent continues on a stone-paved path leading to Panagia Drossiani. The church with the triple-alcoved, conical dome and the three adjoining chapels, adorned with frescoes in many layers dating between the 7th and the 14th centuries, is considered, along with Chalki’s Panagia Protothronos, the most important in the entire Cycladic region.

The trail terminates at Moni, a farming, olive producing village which also has a notable tradition in weaving.

– The second trail starts in an easterly direction and then turns northeast.

After going past the historic Barozzi/Gratsias/Fragopoulos tower house at Chalki, it heads to Akadimi, where it meets three successive monuments: the Markopolitis/Papadakis tower house, the cruciform, domed Church of Panagia Akadimiotissa (via a short detour) and Agios Nikolaos, which features a marble iconostasis.

It continues on an asphalted road to Kaloxylos. A stone-built bridge and fountain can be seen at the end of the picturesque village which is set among the olive groves and the orchards.

Ascending through a lush patch with oak, kermes oak and maple trees, and past a folk wood sculpture workshop and a traditional tavern, the trail ends at the square of the village of Moni. 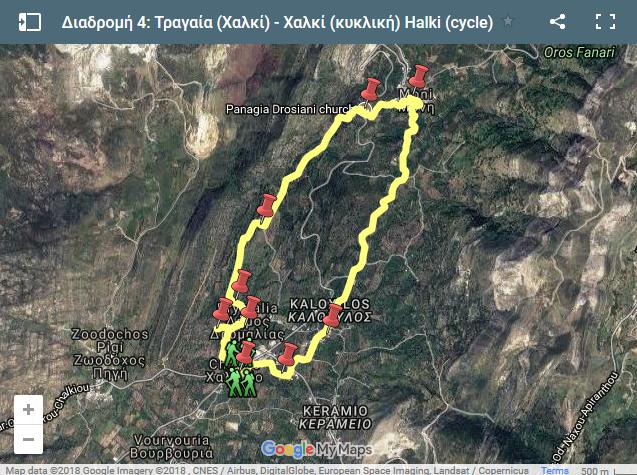 0 0 0
Previous : Trail 5: Tragea to Ano Potamia
Next : Trail 3: Through the Heart of the Tragea Valley