The trail starts from Tsikalario, from the plateau where the font of Agios Stefanos is situated, goes past the primary school and heads for the adjacent pretty village of Chimarros via a narrow, cement-paved road.

It then follows a southwesterly direction on a path that crosses the stream and meets the chapel of Taxiarchis –recently restored and with non-iconographic décor.

The footpath opens up into a farm road and reaches the attractive chapel of Agios Sissois, next to the provincial road.

The route now follows a southerly/southwesterly direction, initially on a farm road and then on an old, wide, cobblestone path.

A short distance to the south is the Church of Agios Artemios – also restored and with non-iconographic décor.

The cobblestone path leads to the complex of Agii Anargyri, with a pretty courtyard in a lush location. Note the rare complex of three Byzantine churches and the frescoes.

The route returns on a farm road, a detour from which on the right will take you to the tower of Paleologos –the largest and one of the best preserved on Naxos.

The cruciform, domed Church of Panagia Orfani is nearby.

The farm road leads to a footpath that brings you to the provincial road (bus stop).

Cross the road exactly opposite and walk for a few minutes on the tarmac-paved road that diverts to Sagri.

Continue on the cobblestone path around the small pine forest and enter Sagri at the point of the primary school.

The settlement is of special historical and architectural interest.

It is also the starting point for the last stretch of the trail, to the ancient sanctuary of Demeter and Kore.

A small detour will take you to the Church of Agios Nikolaos, which features excellent frescoes.

The end of the trail at the small hill of Gyroulas is especially rewarding for the visitor.

The largely restored archaic temple wields a commanding presence in the midst of a farming area.

Research confirms that it was preceded on the same spot by an 8th c. BC farming sanctuary.

The remains of a three-aisled, early Christian basilica of the 6th c. are also evident. 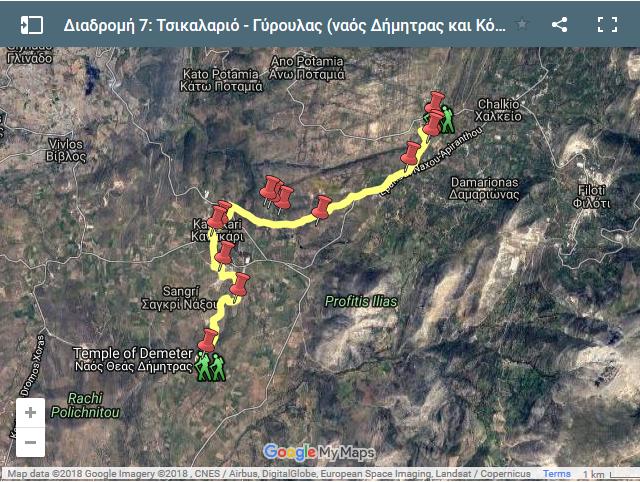