This is a long and widely varied route, crossing the water-plentiful central part of Naxos.

Starting at Agii Apostoli, the largest settlement of the village of Melanes, you have two options:

The first will take you to picturesque Kourounochori, situated on the hill slope across the valley, with the imposing Sommaripa/Fragopoulos tower house – one of the oldest on the island.

The second alternative route crosses the lush Melanes valley and will take you past a number of sights, including the Church of Agios Georgios –initially a late Roman structure and one of the first venues of Christian worship identified on the island, with frescoes of various historical periods.

The two alternative routes meet on the narrow walkway connecting Kourounochori and Myli – which you reach after going past some imposing watermills at an idyllic location.

The trail follows an elliptical course, below the installations of the ancient aqueduct, which can be visited, and ends at Flerio.

There, you can see the archaic sanctuary by the water springs and the half-finished, giant, 6th century BC statues of Kouroi in the area of
the quarries.

From Flerio, the trail initially goes uphill on a wide footpath towards Potamia.

Along the route you will see threshing floors and lime furnaces in good condition.

After Ano Potamia the trail forks out, with one leg going slightly uphill toMessi (“Middle”) Potamia, crossing the settlement and rejoining the second leg alongside the stream at the shady Platanaki position,with a traditional, stone-built laundry facility.

At Lierado position, a downhill detour will take you to Kokkos tower, rising above the gully.

After reaching Kato (“Lower”) Potamia, the route takes you through fruit orchards to rejoin the stream.

A short distance from the village, at Episkopi position, you will come to the big, historic Church of Agios Mamas, or Theoskepasti –a cruciform, domed structure with some rare frescoes and inscriptions.

The trail ends at Mitropolou position, by the Chora-Sagri road, which may be opted for as a reverse starting point of the route. 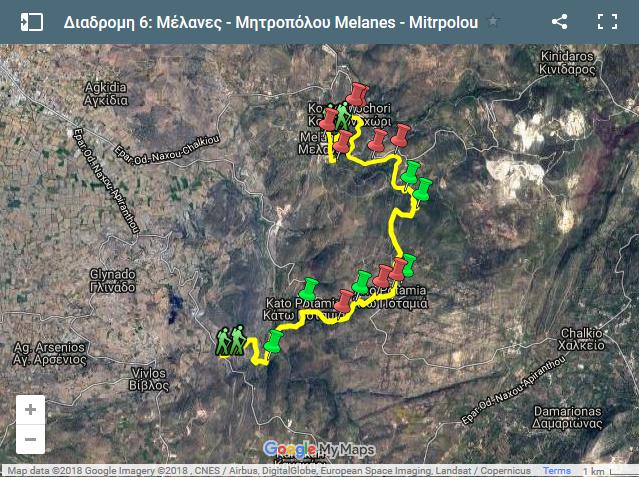 0 0 0
Previous : Trail 7: Trail to the Ancient Sanctuary of Demeter and Kore
Next : Trail 5: Tragea to Ano Potamia